“And so it is done.  I say goodbye to all of you.  God bless and good night.”

The 1999 national championship game between Tennessee and Florida State was supposed to be Keith Jackson’s final game.  He had announced his retirement at the outset of the 1998 football season.  Millions of his loyal fans pondered how Saturdays would be the same without the distinctive Georgia accent describing off-tackle breakaways and screen passes.

That one sentence stuck with me on his final signoff:  “And so it is done.”  The final chapter was written in a storybook sportscasting career.  My thoughts were “And So It Is Done” would be a perfect title for a Keith Jackson autobiography.

Little did we know we still had 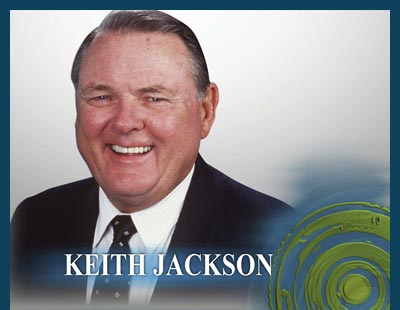 seven more years of “retirement” from Jackson.  After a series of negotiations, he agreed to an easier schedule of Pac-10 games with Dan Fouts that required less of a commute from his Pacific Northwest home.

Keith Jackson was indeed Mr. College Football before columnist Tony Barnhart acquired that title.  Yet, his association with Army-Navy, Alabama-Auburn and Georgia-Clemson left a later generation without an appreciation of the broad expanse of his experience.

I will not recap the same litany you will read in the many tributes and obituaries.  I will share a few personal memories of telecasts and legends attached to Keith Jackson.

The assorted recaps of Jackson’s career have inserted the headline “whoa, Nellie” as his trademark line in a football telecast.  That may be the most exaggerated urban legend on his roster.  He did use the phrase in a commercial during the tail end of his career.  However, he once asserted that he never said “whoa, Nellie” while calling a game; the connection came largely from impersonations of Jackson by comedian/sports interviewer Roy Firestone.  Jackson was none too impressed by Firestone’s mimicry.  One of his routines went something like this:  “And it’s another eight-yard gain by Leroy Mullis from WAY-cross, Georgia….he motored around right tackle like a four-wheel drive….whoa, Nellie!”  Jackson may have used the term at some point but I challenge you to filter through the ABC Sports tape library and find an outing where he did.  In the frequent legendary games on ESPN Classic, “whoa, Nellie” is never there.

One of my fondest memories is of something uncharacteristic in Jackson’s impeccable delivery.  He prided himself on strong preparation and an ability to maintain professionalism under any circumstances.  The New Year’s Day 1981 national championship game between Georgia and Notre Dame may have been one exception.  Jackson was setting up the match, indicating that the Bulldogs had never been so far since the days of Charley Trippi.  The producers opted to insert a tape of a short, elderly fellow in a bright red sweater.  Jackson said:  “Here’s just a sample of how the fever had hit Bulldog fans.”  The gentlemen flashed a big grin and yelled:  “HEYYYYYYYY…..HOW ‘BOUT THEM DOGS!!!!  Hum baby, hum baby, hum baby, hum baby, hum baby, hum baby, hum…..”  When the director cut back to the press box, Jackson was in hysterics.  He had three or four keys to the game remaining.  As he attempted to start each one, he could not avoid breaking into more laughter.  I don’t know if Jackson ever met the man but the little fellow went down in history as the only civilian to ever break up Keith Jackson during a broadcast.

In the mid-1990s, I lived in the country where one required a satellite dish to receive acceptable television reception.  I had one of those huge C-band dishes in the days where you could find interesting byplay between sports announcers on the “backhaul” feeds that were not available to over-the-air viewers.  Apparently communications in Jackson’s headphones were faltering.  He was letting the production crew know it.  “All I’m hearing is loud ringing in these things!  It’s so loud, I can’t hear anything you’re saying or anything anybody else is saying.  You better get this thing cleared up or I’m taking these things off and throwing ’em right out the window.”  One assumes the headphone issue was summarily resolved.  I never heard Keith complain about them for the rest of the telecast.

The ABC college football season opener in 1983 was Georgia vs. UCLA in Athens.  For years, Jackson was paired with former Arkansas coach Frank Broyles in the booth.  This was the game in which Rick Neuheisel was in his senior season and started at quarterback for the Bruins.  At least three times during the telecast, Broyles told Jackson how impressed he was with “this Rickheisel.”  Jackson, who enjoyed Broyles, was amused every time.  However, late in the game, with UCLA driving for what would have been a winning touchdown, Neuheisel called a time out deep in Bulldog territory.  Then, before running a play, Neuheisel called another time out.  “He cain’t DO that, Keith!  He cain’t call two time outs in a row!” shouted Broyles.  Jackson said:  “I don’t know if he can or not but if Frank Broyles is that adamant about it, I would suggest he’s about to be penalized.”  UCLA was penalized.  Georgia won.  The Bulldogs eventually backed out of the return game in the Rose Bowl the next year.

Only TV sports historians and devotees remember that first season of NFL Monday Night Football when Jackson was the first play-by-play commentator for an innovative experiment.  ABC was given 13 weeks of prime time pro football for the bargain price of $9.3 million.  That figure is correct.  CBS had failed twice with Monday night games, including once with the Green Bay Packers and another with the Dallas Cowboys.

ABC Sports President Roone Arledge’s plan to give nighttime football an opportunity for success was to turn it into sports entertainment.  Jackson, whose biggest fame was from calling USAC races with Chris Economacki, was given a huge career boost in the role as play-by-play commentator.  The pairing of retired Dallas Cowboys quarterback Don Meredith and outspoken Howard Cosell was considered the counterpoint to sell the package as something different from the Xs-and-Os tradition of Sunday afternoon.

I was a senior in high school when Monday Night Football began in 1970.  Bedtime prevented me from seeing the finish of most of the games except on the eve of one teacher in-service day.  While many viewers were either entertained or agitated at the jousting between Meredith and Cosell, the latter of whom actually had been a commentator in the 1950s when ABC had a package of Saturday night NFL games, one line stayed with me well after the season.  After every extra point kick, before pitching to a commercial break, Jackson would say:  “NFL Monnnnnn-day Night Football…..a great way to spend an autumn evening.”  The next year, when I commuted home to do public address announcing at my alma mater’s games, I admittedly stole the line.  After every Bulldog extra point, I said, “Waycross High Friiiiiiii-day Night Football…..a great way to spend a summer/autumn evening.”  The home fans were amused.  The visitors usually were not.

If you rent or buy the made-for-cable movie Monday Night Mayhem, you will see a reasonably accurate account of those early years of Monday Night Football.  Jackson was on the package for only one season, though he was given a parachute with NBA basketball (bumping pioneer sportscaster Chris Schenkel, whom Jackson later replaced as the lead voice on college football).  He found out he was being replaced by Frank Gifford on the prime time NFL games by reading about it in the trade papers.  He made call after call to Arledge, who was notorious for not returning phone calls to his staff.  Arledge never answered.  In a dramatic scene in the film, Jackson enters Arledge’s office with that jut-jaw Marine personality at its firmness.  He asked why Arledge wasn’t man enough to tell him to his face about losing Monday Night Football.  Arledge said:  “I was going to, Keith, but I never heard from you.”  Jackson proceeded to pull out logs detailing every call he made to Arledge’s office after learning of the news.  Arledge had no answer.

Despite the Monday night snafu—-and one would never agree that Gifford was ever a better announcer than Jackson—-the NFL’s loss was college football’s gift.  He made our Saturday afternoons appointment television with him for more than three decades. 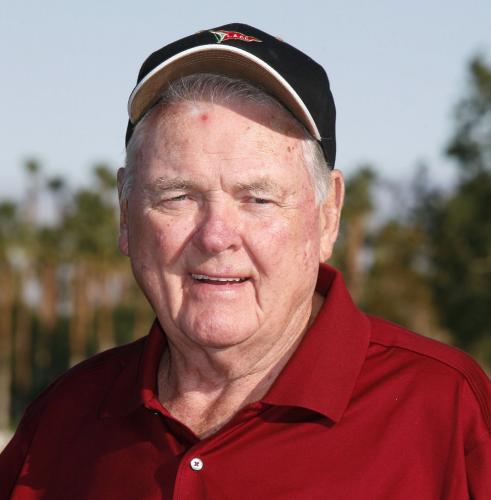 When he finally did make that final call, it was one for the ages.  Vince Young dramatically drove Texas down the field for a final touchdown with only seconds left in a spine-tingling Rose Bowl to beat Southern Cal.  Jackson, in the same mode as the great Ray Scott on NFL games for many years, backed away from the mike and let the pictures tell the story.  He was a master at it.  When he finally returned to speak, he told everything with a simple sentence:  “It’s been a game of drama, of emotions, and great plays—-and the Longhorns are gonna win it.”